Happening now at MHA >>> Find out how we celebrated the power of connection!

In homes, in schools and in our very own clinics, celebrations big and small unfold each day in the lives of those we serve.

On Thursday, October 24th, we gathered to recognize the many celebrations your support has made possible this year. Celebrations like:

LaRissa, a five year old in foster care, graduating from Pre-K cheered on by an MHA volunteer who advocates for her needs in Family Court

Carol, a formerly homeless 51 year old, picking out a keychain to adorn her new set of keys, which unlock the door to her first apartment

Mark, who had lost confidence in himself after years of unemployment, beginning a meaningful career at a local nonprofit

Frank, who tirelessly worked on his parenting skills, welcoming his children home after gaining full custody following the loss of their mother 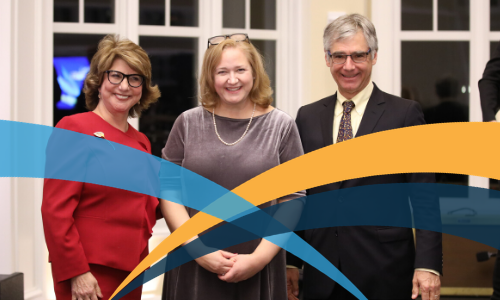 We are grateful for everyone who joined us for this special evening as we recognized the achievements of our honorees and celebrated the real impact your support has.

Michael Lombardi is a long-time, dedicated member of The Mental Health Association of Westchester’s Board of Directors. From 2013 to 2017, he served as President of the Board. Under his leadership, the agency experienced significant growth in both size and in the breadth of services offered.

During his 25-year career in the media industry, Michael held senior finance positions at ESPN, Madison Square Garden, NBC, and Showtime Networks. For the last 15 years, he has shifted his attention to the not-for-profit world. Michael has served as the Chief Financial Officer at Sesame Workshop, which produces Sesame Street and other educational programming. He has also worked as the Executive Director of the Adirondack Museum. In addition, he has consulted for several other non-profit organizations.

Michael holds a B.A. and M.B.A. from Columbia University and currently serves on the Board of Directors for the Jacob Burns Film Center. He lives in Chappaqua with his wife Kate.

Linda Rosenberg was President and CEO of the National Council for Behavioral Health from 2004 until June 1, 2019. Under her leadership the National Council has become the nation’s largest mental health and addiction education and advocacy association with 3000 government and not-for-profit member organizations serving 10 million Americans.

The National Council helped secure passage of the federal parity law and the Comprehensive Addiction and Recovery Act (CARA); advanced the integration of behavioral health and primary care, leading to the creation of a Medicaid Health Home option; ensured passage of the Excellence in Mental Health Act; and introduced Mental Health First Aid in the U.S.A.